This one is done with kids in mind??or for those who want to feel like one. It's called" the Any Flavor Life Savor Ice Shaver". Shaved ice in Hawaii to a keiki (kid) is like a frosty Mai Tai to an adult. It's also a great way to cool off on the warm beaches of Hawaii at just about any age.

I took the idea of an old bright red lifeguard stand that is sitting on the beach in Waikiki. The Waikiki lifeguard is the ultimate "life saver". I thought, what if you took one of those and built a contraption that made awesome cones of Hawaiian shaved ice...right on the beach. I thought, ok, let's put some of those skilled parrots you see all over the sidewalks in town just having their pictures taken and put them to work. So, this "machine" is Parrot powered!

If you look closely, you see the parrots teeter tottering on the bamboo perches, which drives the cam wheels. This turns the "bottle teeth" of the gears, which both shakes the dashboard Hula dolls for a little entertainment and spins the Samoan Knives. As this happens, the stack of ice blocks loaded in the tower feeds the below and one by one are "shaved" into a fine powder. This falls into the upside down beach umbrella where the "scooper Parrot" can pack the cones. That bird then flavors the ice by unclipping the clothespin on the hose of the chosen flavor bottle.

Now, the finished cone of shave ice is handed to the "server Parrot" which walks out to the end of the surfboard and presents the frozen tropical delicacy. What better way to appreciate the magic of a Hawaiian rainbow than to feel like you can actually eat one!

This is a brand new, shrink wrapped art print by Thor. The image is roughly 8x10, and is double matted to fit in a standard 11x14 frame. The mat also has a special embossed foil stamp which reads Thor - Hawaii. 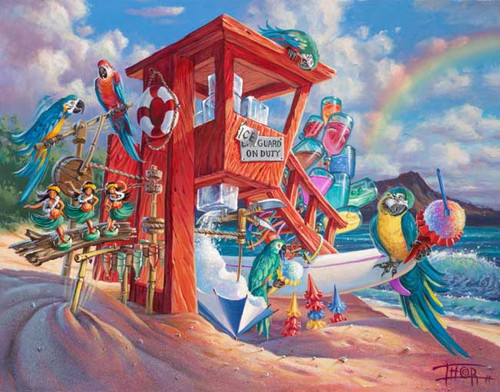