Koa is part of the Acacia family of trees and is recognized as one of the finest textured woods in the world. This native of Hawaii is truly a monarch of the forest, growing to heights of 100 feet. The best Koa (Acacia koa) can be found specifically on higher elevations of the Big Island and take 50 to 70 years to mature.

Different parts of the island yields a distinctive hue to the color of the wood. Currently the wood we use at Hawaiian Accessories is from Honakaa which has a dark red look. We also purchase wood from Hoonaunau in Kona which has an orange-brown color and wood harvested in Volcano, in the Puna district which has a lighter brown coloring.

In ancient Hawaii, Koa wood was harvested exclusively for the alii class or royalty. The huge logs were crafted into sculpted images of gods, personal containers and canoes for royalty. It is said that when the early Hawaiians wished to choose a Koa tree for a canoe, they found one which the elepaio bird had not been pecking.

By the turn of the century, koa was called the Hawaiian Mahogany and used extensively by the upper class and government buildings for furniture, staircases and other woodworks. Beautiful examples are still viewed in such places as the Iolani Palace.
Write a Review 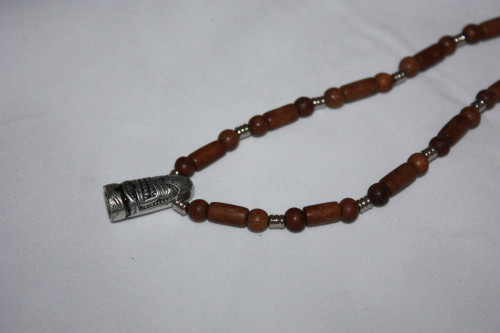